The Dude Diet: Clean(ish) Food For People Who Like to Eat Dirty is now available online and wherever books are sold.

order the dude diet from:

order the dude diet dinnertime from:

Wait. WTF is The Dude Diet?

In a nutshell: The Dude Diet is an awesome lifestyle that will help you feel better and look hotter without giving up the foods you love.

The backstory: 8 years ago, I fell madly in love with a wonderful and hilarious food-loving dude named Logan.

Before we go any further, I need you to understand a few things about Logan Smith Unland and his unparalleled obsession with “dank eats.” This is the type of man who discusses a favorite sandwich or pizza in the same giddy, adoring way that most adults gush about their child or pet, right down to showing unsolicited photos on his phone. He comes close to hyperventilating in the vicinity of melted cheese, hasn’t missed our local barbecue festival in over a decade, and braves ailments ranging from cayenne-induced rashes to somewhat alarming meat sweats in his relentless pursuit of deliciousness. I’d go on, but you catch my drift.

When we first met, I was a culinary student at Le Cordon Bleu Paris, and Logan’s die-hard passion for food was one of the many things that piqued my interest in him. And since the first few months of our courtship were long-distance between Paris and New York City, I chalked up his batshit crazy decadent meal choices on dates to special occasion eating. He definitely ate some nutritious stuff on his own time, right?

WRONG. Upon moving in together, I quickly realized that Logan’s day-to-day diet was, in a word, terrifying. Scarier still was the fact that he thought he ate “pretty healthy.” Given that Logan’s primary food groups were meat, cheese, white bread, and Coors Light (all of which were consumed with flagrant disregard for normal human portion sizes), this belief only served to highlight his nutritional confusion. The more we talked about nutrition, the more I began to worry about Logan’s long-term health. If the iceberg lettuce and carrot shavings beneath his daily serving of chicken tenders—aka Buffalo chicken salad—remained his primary source of vegetables, he certainly wasn’t going to win any longevity contests. I was actually rather surprised he’d made it to the ripe old age of 28 without falling victim to anything more serious than a raging Zantac habit.

Desperate to help my new roommate avoid an early, and likely deep-fried, grave, I’d occasionally suggest that Logan consider cleaning up his diet, only to be met with anti-kale rants and refusals to eat weird vegan things like me. (I found the latter a particularly interesting rebuff as I am neither vegan, nor do I enjoy eating weird things.) He blanketly condemned all health food as “boring and gross,” repeatedly scoffing at my claims that nutritionally sound meals could taste just as awesome as his beloved Chinese takeout or football-sized burritos…

Motivated by love (and my competitive nature), I committed myself to overhauling Logan’s perspective on eating well. Fully aware that he would never restrict himself to a life of steamed chicken breasts and broccoli, nor wanting him to, I decided to recreate his favorite comfort foods—I’m talking everything from lasagna and cheesesteaks to cocktails and cupcakes—using nutrient-dense whole foods. My mission wasn’t to create recipes that were “good for being healthy,” but rather ones that were straight up delicious and elicited the same excitement freakouts associated with more fattening fare. It wouldn’t be easy, but I knew that if I could pull it off, Logan might just come to see the healthy eating light.

And he did! The Dude inhaled my cleaner creations without question, happily eating more lean meats, whole grains, vegetables, and eventually, his words. Slowly but surely, he dropped his post-college fun pounds, felt more energized, and began making smarter food choices and exercising respectable portion control on his own, which was downright inspiring to witness. If I could get Logan psyched about nutritious food, I knew I had a shot at converting other skeptics. And thus, The Dude Diet was born.

*For more on The Dude Diet and its unlikely ambassador, the always sexy Logan Smith Unland, check out the blog series that inspired the book here.

Tell me about the cookbooks!!! 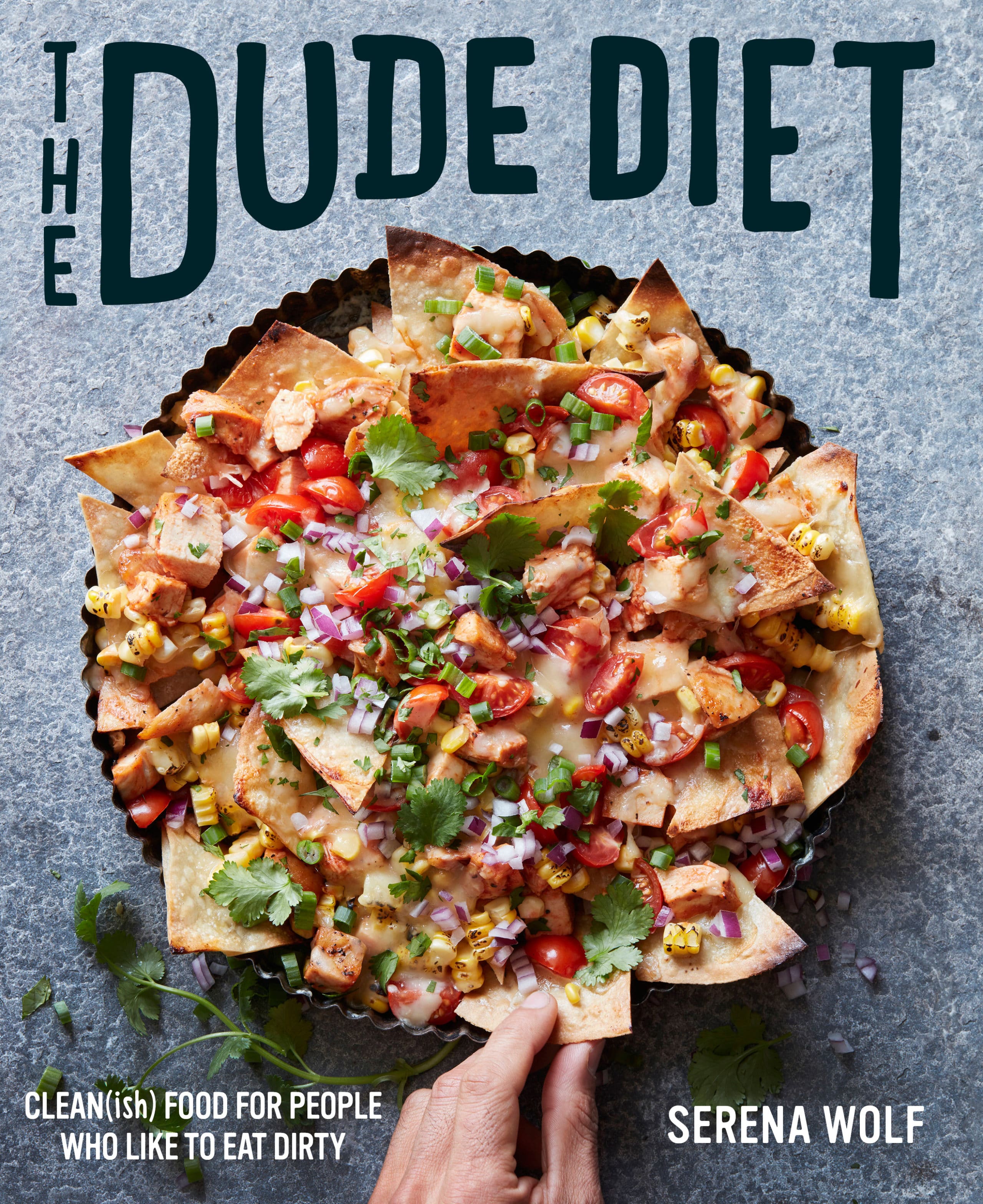 The Dude Diet: Clean(ish) Food For People Who Like To Eat Dirty is my Buffalo-scented love letter to Logan and his nutritionally confused peers the world over. It provides the building blocks for a healthy lifestyle—from kicking cravings and portion control to responsible boozing and the concept of No-Calorie Sunday—as well as 125 foolproof recipes, all of which can be accomplished with minimal kitchen equipment and culinary skill. The goal? Help people get their shit together on the nutrition and cooking fronts, and make it as fun and tasty as humanly possible.

Since the book’s release in the fall of 2016, hordes of men, women, and children alike have enthusiastically embraced The Dude Diet, which truly warms my heart. As I’ve maintained since writing the inaugural blog post more than six years ago, The Dude Diet may have been inspired by a nutritionally confused dude and conceptualized with his beer guzzling, finger food crushing, meat sweat suffering brethren in mind, but its core philosophy and flavor-packed recipes have universal appeal. The Dude Diet is a lifestyle for anyone—regardless of gender, age, and nutritional understanding—who wants to grab their health by the proverbial balls, get busy in the kitchen, and eat drool-worthy nutritious food sans deprivation. In a time when everyone and their mom seems to be promoting a new diet with a laundry list of restrictions (Paleo, and Keto, and Whole30, oh my!), The Dude Diet offers an accessible alternative for those looking to live well while without sacrificing the foods they love. As one Dude Dieter so eloquently stated: The Dude Diet is a lifestyle for the rest of us.

In the wake of The Dude Diet’s release, I’ve been lucky enough to meet countless Dude Dieters both in real life and online. And while our discussions have covered every topic from Logan’s impressive chest hair to successfully foisting quinoa bakes on toddlers, most convos typically end with the same request:

Ask and ye shall receive, friends... The Dude Diet Dinnertime: 125 Clean(ish) Recipes for Weeknight Winners and Fancypants Dinners is filled with crave-worthy dinnertime recipes made with mostly good-for-you ingredients, and there’s a little something for every type of occasion and Dude Diet chef—from bomb burgers and sandwiches and fuss-free one-pot meals to slightly elevated Dude Diet options for hot dates and dinner parties. (I made sure to label recipes that take 30 minutes or less with a Quick + Dirty stamp should you be pressed for time.) Many recipes are complete meals in and of themselves, but there’s also an arsenal of sexy sides that you can mix and match with your favorite meat and seafood mains to create an endless variety of epic feasts. people that are down with the dude diet

“Whether you’re looking to drop serious weight or you simply want to eat awesome food without feeling like crap, The Dude Diet has your back.”

“Serena Wolf gets it. We all want to look good, we want to feel good, but we want to be bad. Indulgent, drool-worthy, #foodporn feasts call our name. Luckily, her dude food for manly men (and badass ladies) is just what we ordered: double flavor, extra nutrition, hold the beer belly. I’ll take 2!”

Daphne Oz, co-host of ABC’s The Chew, NYT bestselling author of Relish: An Adventure in Food, Style, and Everyday Fun

“With The Dude Diet, Serena Wolf proves that being nutritionally conscious doesn’t mean giving up delicious, crave-worthy comfort food. I love her healthier take on staples like Mac and Cheese, Nachos, and Pizza. This funny, approachable cookbook is for anyone who cares about health but wants to keep eating like a dude.”

Andie Mitchell, NYT bestselling author of It Was Me All Along and healthy lifestyle blogger

“If you want to feast like a rockstar without getting man boobs, Serena’s Philly Cheesesteaks, Nachos, and Buffalo Chicken Tenders might just save your life.”

“I think a book of guy-approved recipes is genius. Have your man whip something up on your next date night.”

“I love rich indulgent gourmet meals, but I'm a busy mom on a budget. I don't have time to go looking for specialty ingredients. I also need foods that are simple, flavorful, and healthy that the whole family can relate to. This book delivers just that. I have made 4 meals from this book and each one has been better than the last. My 12 year-old didn't even realize she was eating quinoa.”

“I've been an Amazon Prime member for 4 yrs and I don't think I've ever written a review. This book is AMAZING!! I never even thought I could cook this well…Everything tastes great and what's better is that I know exactly what's being put into the meal and it still tastes delicious! Plus the recipes are relatively quick (so far I've only experienced about 30 - 60 minutes of cooking time) but SUPER easy. Everything has been simple to make, nothing has called for a ton of ingredients, and the taste is PHENOMENAL. This is absolutely the best cookbook I've ever purchased. I really do love it and I plan on giving it to a few people for Christmas. Not only is it an amazing cookbook but I'm going to even go as far as to say that the Chicken Parmesan was probably the best Chicken Parmesan I've eaten. I'm serious when I say that I love this cookbook. I can't stress how easy the meals are and how delicious they taste. Buy this book and you will love it!!”

“I was in the midst of preparing PENNE WITH SPINACH PESTO and couldn't figure out how much Parmesan cheese to add to the recipe. Oh, wait a minute...there isn't ANY added (unless you want to sprinkle it on before eating) which is part of what makes this and every other recipe in The Dude Diet "okay" to eat, and eat often!!! There isn't a recipe from cover to cover that isn't easy to cook AND completely and totally satisfying when you're aching for something realllly tasty that's also good to eat! The dudes in my family have been stunned by everything I've made....from the DUDE DIET PARTY MIX (yaayyyy....NO butter!!!) to the SHRIMP PAD THAI to the ultimate BOSS BEAN DIP (and a lot of "girly" food in between). This is the best cookbook I've ever had the thrill of working through. What an enormous treat in this day of fad chefs to have Serena create a most memorable, simple, delicious, healthy cookbook for ALL of us to enjoy, not just the dudes in the world!!!!! YAY!!!!”

“Incredible!!! I love cookbooks but this is by far my favorite!!! My family has never liked my cooking but now that I am cooking from this book, they can't get enough! I am a preschool teacher, mommy, wifey, and full time student so I don't have much time to cook but every recipe takes about 30 minutes-1 hour to make. It is amazing, don't hesitate to buy!!! The writing is witty, I was cracking up, a great read and awesome cookbook!!! Not one recipe has been a dud and I am loving the praise!!!”

“Good food with less guilt! This cookbook has been by far, one of the best cookbooks I own. So far I have made the epic meat loaf and rotisserie chicken and they were phenomenonal! I can't wait for football season or any other excuse to make some of the drink and snack recipes!”

Read it? Loved it? Spread the Word.

Recipes from The Dude Diet