As kids, my little brother and I were pretty much inseparable. Being six years younger, I suppose Elliot didn’t have much choice in the matter, but I’m sure he loved my hanging out in his playpen, putting wigs and makeup on him, and pushing him around in my doll stroller. He was such a cool baby that I even brought him to Show and Tell in second grade, which pretty much blew the other kids’ hamsters, bug collections, and boring stuffed animals out of the water. I also carried him around like a giant human security blanket until he was five years old (and he was not a small five year old), ignoring the advice of my mom, and eventually, my chiropractor.

Unfortunately, I missed out on a lot of Elliot’s formative years while I was away at boarding school and college. However, despite a worrisome awkward stage in middle school, he seemed to manage pretty well without me. Realistically, I shouldn’t have been concerned about the awkwardness, since my pre-teen days weren’t exactly my finest either (see: Winona Ryder pixie cut, braces, Juicy Couture jumpsuits) and I grew up to be awesome. Although his tween days are long behind him, it’s still hard for me to accept that Elliot is now 20 years old. Yet, he is a rising junior at UPenn, he grows some light facial hair, and he is currently living in LA for the summer doing an internship at AEG. So, I guess I can’t deny the fact that Elliot is becoming a man, or at the very least, a rapidly maturing man-child. He is also hilarious, smart, and well-dressed. (I figure this post may as well double as his online dating profile.)

My mom is always telling me Elliot that he needs to “grow up and be self-sufficient!” and I think that is more or less Elliot’s plan for the summer. While I’m very proud of his initiative, and I’m sure he’s taking the intern-world by storm, I cringe whenever I think about his diet and the state of the house he’s currently sharing with several friends. I can only imagine the hot-messiness of the day-to-day living situation. Like most 20-year old dudes, Elliot’s domestic skills are rather pathetic. He inherited our family’s “messy” gene, his bed-making skills are poor at best, and I’m 99% sure that he has no idea how to do laundry or even run a dishwasher. (Sorry to call you out, bro.) I’ve also never seen him cook anything other than hot dogs and Annie’s Mac and Cheese from a box, which doesn’t bode well for his health or his ability to feed guests, especially of the female variety. That is why I’m hoping to convince him to give cooking a shot during this “summer of self-sufficiency.”

Elliot doesn’t know how to cook, but that’s okay. He doesn’t really know how to drive a car either, but he’s been doing that regularly and seems to be improving (no accidents in almost five weeks!), so I don’t see why he can’t do the same with his cooking skills. Practice makes perfect, and the stakes are a lot lower in the kitchen than on the streets of LA. I’m confident that he can rustle up enough pots, pans and motivation to make a few decent meals for himself and some friends over the next couple of months.

Learning to cook is an important life skill, and, as I’ve said many times before, it generally leads to compliments. (This is good, since Elliot shares my affinity for flattery.) Obviously, I’m not expecting Elliot to be whipping up lavish three-course meals right from the start. There’s a cooking learning curve (that is usually a lot steeper for college males than any other demographic), which is why a beginner recipe like Spaghetti with Cherry Tomatoes, Mozzarella and Basil is a good place for him to start. This spaghetti is a delicious, idiot-proof meal that can be easily prepared for a group in less than half an hour. Everyone knows that tomatoes, mozzarella, and basil are a boss trio, and they certainly don’t disappoint in this recipe, which requires few other ingredients. If you didn’t already know, summer is cherry tomato season, folks, and this sauce plays up the beautiful colors and flavor of these tiny badass fruits. Their sweetness is enhanced by a little bit of olive oil, slivered garlic, and some crushed red pepper for heat. Fresh mozzarella, which gets warm and slightly melted in the spaghetti, is always a hit, and chopped basil adds a bright, herbal kick.

Spaghetti with Cherry Tomato Sauce, Mozzarella and Basil is surprisingly light for a pasta dish, and it also tastes great cold, which makes it ideal for summer. It’s simplicity means that it can be easily thrown together for a weeknight meal, but I’m hoping that both you and Elliot will invite some friends over to eat this spaghetti with you. A nice bottle (or box) of wine, a loaf of fresh crusty bread or focaccia, and a simple green salad are all that’s needed for a fabulous dinner party. Elliot, please get on this and report back. Your friends, family and future girlfriends (hint, hint) are guaranteed to appreciate your newfound culinary skills. They would also appreciate you learning how to do the dishes. And to all of the college kids out there, go forth and conquer the kitchen! If nothing else, learning how to cook for yourself will make the post-college transition to the “real world” much less painful. Truth. 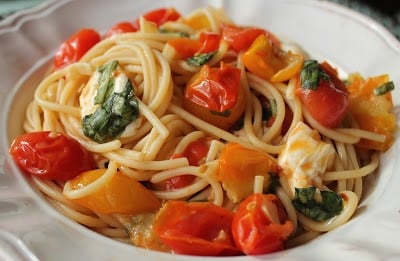 Preparing your Spaghetti with Cherry Tomato Sauce, Mozzarella and Basil:

*Put a large pot of water on to a boil to cook your spaghetti.

-Start by preparing the sauce. Slice about ¾ of the red and yellow cherry tomatoes in half, leaving the remaining ¼ of the tomatoes whole. (This is purely for textural purposes.)

-Heat 2 tablespoons olive oil in a large saucepan. Add the slivered garlic and sauté over medium-low heat for about 3 minutes until slightly golden and fragrant. Please be careful not to burn the garlic, kids. 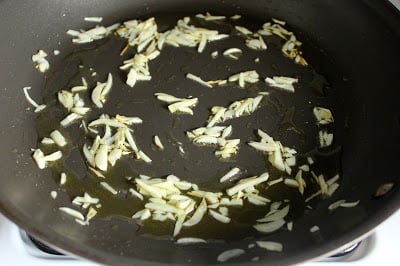 -Add the cherry tomatoes, salt and chili flakes and cook for about 12 minutes stirring periodically, until the tomatoes have softened. 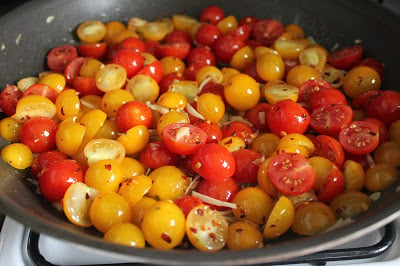 -Once you add the cherry tomatoes to the saucepan, it’s time to start cooking your spaghetti. Add 1 tablespoon of salt to the boiling water and then add the pasta. Cook pasta al dente according to the package directions. Strain the pasta, reserving ¼ cup of the cooking liquid. Return the spaghetti to the pot and toss with 2 tablespoons olive oil to keep it from sticking together. Set aside while you finish your sauce. 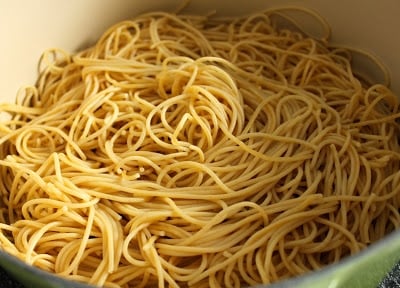 -Using the back of a spoon, gently crush some of the cherry tomatoes to release their juices. Add the ¼ of cooking liquid and allow the sauce to simmer for another 3-5 minutes until slightly thickened. -Pour the cherry tomato sauce over the spaghetti and toss to coat. Stir in the halved mozzarella balls and chopped basil and serve immediately. Enjoy your spaghetti with a side of compliments. You earned it, kids. 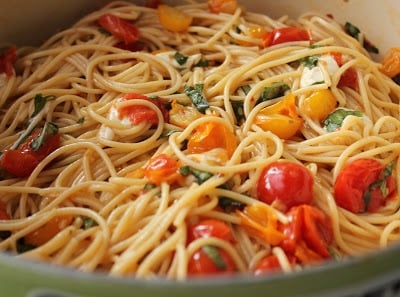 As always, I’m very excited to be a part of Food Network’s Summer Fest this week. For more delicious tomato-themed recipes, check out the amazing blogs below.